The 9 Best Sailing Destinations in June

June is the Perfect Month to Go Sailing, Before High Season but Still With Warm Weather

The 9 Best Sailing Destinations In June

The best sailing destinations in June vary with temperature and crowds depending on what type of yacht charter you desire.

June is a great month to go sailing as in European destinations the weather is warming up and the crowds of summer have not yet arrived. The Caribbean is also a great sailing destination in June as the peak season has finished but the bad weather has not yet arrived.

Some of the best sailing destinations in June are Croatia, Greece, the BVI, Spain, Italy, the Caribbean, and further afield. June is a great time to go sailing as conditions are favourable, prices are often cheaper out of the summer season for yacht charters and flights.

In June you can often find the last minute or bargain trip with fewer people opting to go to many sailing destinations in June.

Meaning also cooler water temperatures which are ideal for swimming and refreshing for cooling off on great sailing destinations in June.

Weather. The weather in Croatia is perfect for sailing with warm dry summers, averaging into the low 90s (30c). The wind varies between force 2 and 5, normally prevailing from the northwest. The sailing season in Croatia begins in May and lasts until October.

Light To Moderate Winds. When choosing one of the sailing destinations in June to visit, wind conditions are an important factor to consider. The winds tend to be light to moderate ranging between 10 and 20 knots. But during this period the winds tend to be more unpredictable than during the summer.

Experience Everything Without The Crowds. So sailing in Croatia in June will allow you to experience everything Croatia has to offer, in terms of tourist attractions, restaurants, and national parks, without all the tourists they receive in the summer. Marinas also tend to be quieter, which allows for easy access for mooring without a large number of boats looking to dock at the same port.

June Events. In June the ‘Porec Summer’ occurs in Istria and from mid-June events, music and dancing occur all over the country in preparation for summer as one of the great sailing destinations in June.

Weather. The weather in Greece in June is great for sailing with the average high for the month being 82f (28c) and the average low being 75F (24c). In June the winds in the Cyclades, Ionian and Dodecanese area tend to be lighter than in the summer months.

Places In Greece. Greece has over 6,000 islands, many of which are both inhabited and uninhabited. The islands are split into main areas an groups, which each have their climates, winds, and sea conditions.

Events. June is Greece is filled with unique and wonderful events to visit and unique things to see and do. These events include the Miaoulia Festival on Hydra Island (mid-June), Nafplio Festival (late June) and the Athens & Epidavros Festival (June to August).

Weather. Italy and its islands are popular sailing destinations in June, with comfortable temperatures, uncrowded sites and beautiful sunny days.

The average temperature is a high of 79f (26c) and an average low of 59f  (15c). During June the sailing conditions are idyllic with between 20 and 25 knots of a prevailing north-westerly wind.

Popular Destinations. Italy has lots of places to visit and things to see making it a popular sailing destination in June, as the landmark places, offer uncrowded destinations an many offer low season prices. The towns of Positano, Sorrento, and Praiano are often crowded in the summer but June offers a break from the crowds.

Events. Sailing in Italy in June offers the opportunity to experience some unique events such as Festa di Sant’ Andrea (June 27th), Ravello Festival (June to October), and in its cycle the Regata Storica delle Antiche Repubbliche Marinare.

Not Just Winter Sun. A great sailing destinations in June, it’s not just a winter sun destination. June is a great time to take a yacht charter in the BVI as high season has come to a close and the rainy or hurricane season hasn’t begun yet.

Weather In June. The BVI’s weather makes it one of the great sailing destinations in June. The average high for the month is 86f (30c) and the average low is 75f (24c), although rainfall can occur in June there is still an average of 8 hours of sunlight a day. The wind tends to be stable between 15 – 20 knots in a southeast direction, which varies from a northeast direction in the winter months.

Uncrowded. The peak sailing time in the BVI is between December and April, with private boats venturing from the Mediterranean across the ocean, bring more boats and tourists to the area. By June the majority of these boats have left back to the Mediterranean in preparation for high season, which means the BVI become a lot quieter once again. This means it is easier to find moorings in marinas or uncrowded bays for anchorages.

Holiday Destination. Spain is a popular tourist destination all year round with fascinating cities, gorgeous beaches and delicious food to enjoy. Spain is a great sailing destinations in June as the weather has warmed up and the summer crowds have still not arrived.

Islands. While Spain itself is one of the great sailing destinations in June, it’s islands are something else, with white sandy beaches, beautiful architectured villages and quiet peaceful natural spots to explore. The Balearic Islands are predominantly made up of Mallorca, Ibiza, Tenerife, and Formentera, among other smaller islands to enjoy.

Sailing. The average weather in June is an average high of 80f (26c) and an average low of 66f (19c), with superb sailing conditions with the NW Tramontana and the NE Mistral winds.

Weather In June. The Bahamas are one of the great sailing destinations in June with an average high of 88f (31c) and an average low of 78f (25c).

The water stays at a comfortable 83f (28c) and wind conditions stabilise at 9 knots and decrease throughout the month. Gentle, trade winds of around 15 knots, are usually blowing from the East all year round.

The Bahamas. Like the BVI the Bahamas are crowded during the winter months with tourists and extra boats in the area sailing. June is an ideal time to visit before the Hurricane weather has a higher risk of appearing and when the towns and bays are quieter.

Sailing Conditions. The French Riviera has idyllic sailing conditions with light winds from April to October, with stable conditions, although high winds can be found out at sea occasionally but overall its one of the great sailing destinations in June.

5 Star Luxury. Monaco, Antibes, and Cannes are famous hubs for superyachts, with high-end 5-star marinas and world-class events such as the Cannes Film Festival and the Formula One Race. In June the there are numerous events in the French Riviera, including the Monte-Carlo Television Festival, St. John’s Day Festival, and many more concerts to witness as one of the great sailing destinations in June.

Ionian. The Ionian Sea is one of Greece’s most popular sailing destinations in June for both beginner sailors and experienced ones.

Sailing Conditions. The Ionian offers light winds and calm waters, with many mainland Greece destinations to explore and islands such as Zakynthos, Corfu, Kefalonia, and Lefkada. The Ionian covers an area of 2,300 square kilometres covering six archipelagos with thousands of islands.

Weather In June. The weather in the Ionian is great for sailing with an average temperature of between 82f (28c) and 75F (24c).

Dodecanese Islands. Made up of 15 large islands and over 150 islands, the Dodecanese islands are made of some of Greece’s most famous islands including Kos, Leros, and Rhodes. Located in the south-eastern Aegean, just off the coast of Turkey.

Sailing Conditions. In June the Dodecanese is great for sailing with an average temperature of between 82f (28c) and 75F (24c). The wind tends to be mild from an eastern and northeastern direction.

Got a Burning Question About Sailing Destinations in June? 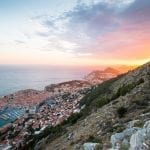 5 Benefits Of Sailing In Croatia In September Or OctoberMonthly Sailing, Sailing Tips 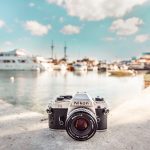