Exploring the South Ionian with the SailChecker Crew

Our visit to the South Ionian Bases, starting from Lefkas

We were so glad that our partners in the South Ionian, and more particularly in Lefkas, had invited us to inspect the base and sail on board the gorgeous Sun Odyssey 439 – “Fregata”.

Our SailChecker Representative, Elpida, has an extensive knowledge of the Ionian Islands. She has been working at the Lefkas and Corfu bases for over 3 years, and has sailed on board different vessels and on different routes.

This wasn’t enough for us, as we wanted to take the opportunity and explore the area as a team, so that we are all able to suggest the best yachts, bases, and yacht options to all the SailCheckers who wish to embark on an Ionian sailing adventure.

We arrived in Lefkas at around 2 pm, to begin our Ionian sailing trip. We arrived through Preveza. There’s an airport in Preveza where you can fly to directly from several European big cities. Lefkas is connected to the mainland via an underground bridge, so you can easily reach the base, even by car or bus. The distance from Preveza is just 15-20min.

The check-in, like in most Mediterranean destinations, takes place at around 5 pm. Should the yacht be ready earlier, you are free to embark at the time the maintenance after the previous Ionian sailing charter has finished.

We took advantage of the 2 hours we had and went to do our provisioning. There’s a mini-market at the base, however, it’s not the cheapest one that you will find! Make sure to get only the things that you really need, at least for your first 1-2 days.

After the check-in, we started our Ionian sailing trip and sailed to Odysseas Private Marina in Meganisi. It’s a very nice small marina, with a private lounge cafe-bar-restaurant, and other facilities like showers, electricity, and water. It’s not the cheapest place to anchor, but it’s worth staying for at least one night. Later on, we wandered around the small streets and had dinner at a really nice seaside restaurant. 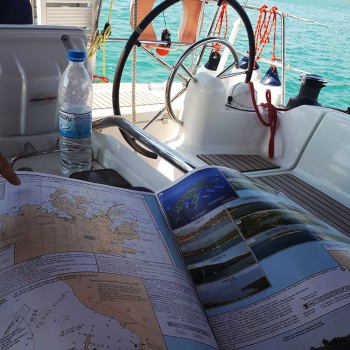 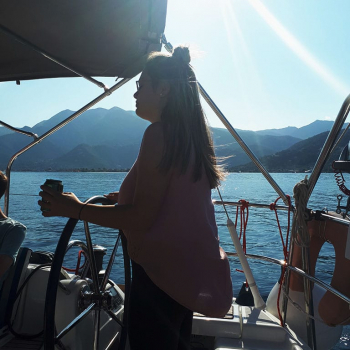 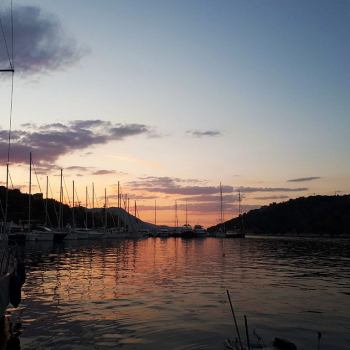 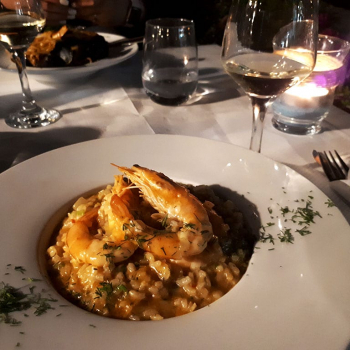 Top 10 Islands to Visit on a Greek Islands Yacht Charter

From Meganisi to Fiskardo (Kefalonia)

2. Day 2 - From Meganisi to Fiskardo (Kefalonia)

We woke up early to an amazing view with a sunny sky and warm weather. Sometimes it can be really cloudy and rainy in Greece during late June, but we were lucky.

Today’s destination is Fiskardo, in Kefalonia, and our aim is to be there as early as possible, as the port is quite small and there are not many berths.

After doing some shopping in Vathi (Meganisi), we started our sailing at around 10 am. We crossed “Skorpios” (Onasis’s Private Island) and we had a swim stop at a nice safe bay, with crystal clear blue waters.

We were in Fiskardo relatively early, however, the berths were already taken and we had to practice our med-mooring skills. Kate and Elpida were the ones that took the dinghy and tried to tie us up on a couple of tree trunks. Well, that was quite an adventure for them, as the outboard engine had stopped working for a while, and they had forgotten to take the paddles with them, so they started being drawn away from our yacht and the shore. The team acted quickly and “saved” them, whilst they managed to tie us up on the second try.

After this exhausting day, we strolled in Fiskardo’s streets and had a nice meal before getting back to our yacht to enjoy a few glasses of wine and take some rest. 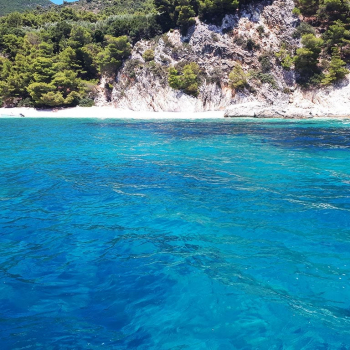 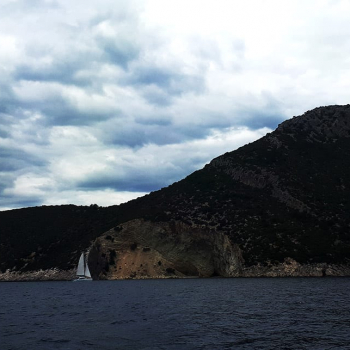 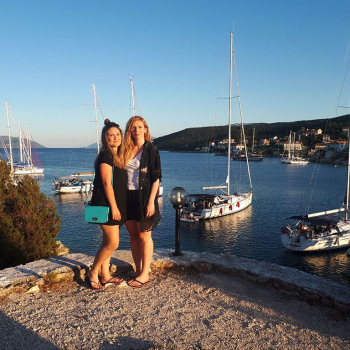 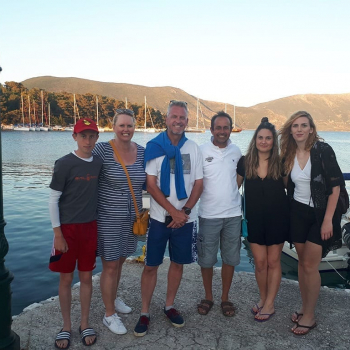 From Kefalonia to Ithaca

After a great night in Fiskardo, and after buying some local products like the traditional “Mandola”, we had breakfast on board and we started sailing to Ithaca.

We had a nice swim stop at a small beach with emerald waters – quite cold! Quick lunch on board and then started sailing again to Ithaca.

We arrived early in the afternoon and found a very nice berth (no fees) at a central place close to the street.

Ithaca is linked to Odysseus and you will find souvenirs with him everywhere. Take some time to walk in the village – it’s really nice and easy to explore.

At night, we decided to eat pizza. The portions were huge, so we took some back for a late-night snack on board, too.

Beers and wine on the yacht, and then slept like little birds, after another exhausting day. 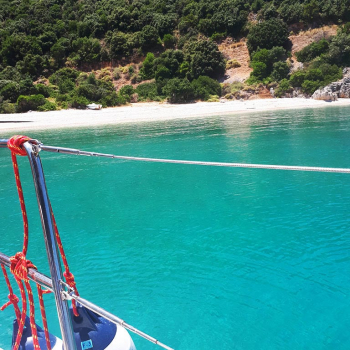 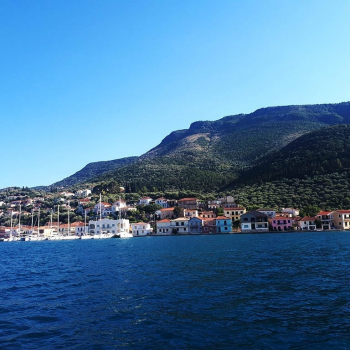 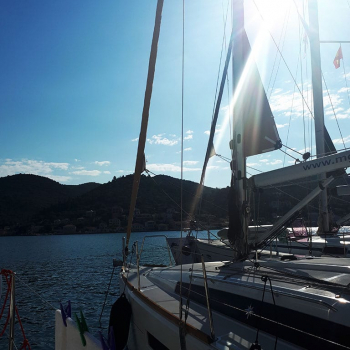 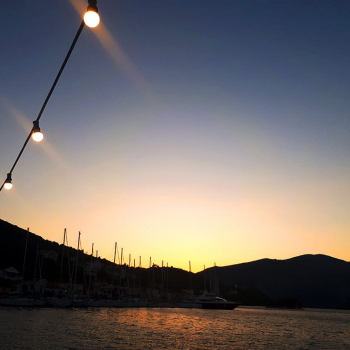 From Ithaca to Sivota (Lefkas)

It’s our last Ionian sailing day and we want to make the most of it!

We had a great breakfast on board, as Kate and Elpida went to do the shopping from a traditional bakery and a local market.

On our way to Sivota (in Lefkas) we had the chance to enjoy a little bit of racing with a couple of monohulls and a catamaran. We found out that we were heading to the same place, so in the end, we shared our photos and impressions with each other.

Sivota is a great stop that you should definitely not miss on a South Ionian sailing adventure. You can find a berth easily if you arrive before 5 pm – well, you will have to wait in the queue – but it will be free of charge, as long as you have dinner at the tavern which offers the berth.

We picked the tavern “Stavros” and we enjoyed a few amazing Greek traditional dishes.

At night, a few of us preferred to go to sleep early, whilst others had some last cocktails before the disembarkation next morning. 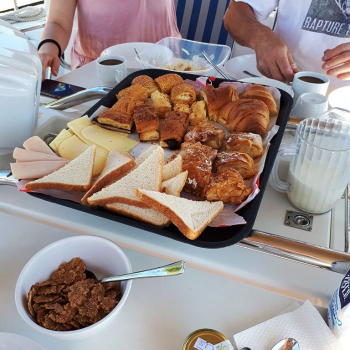 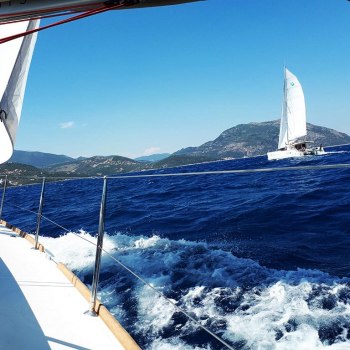 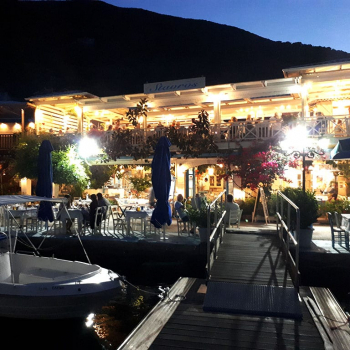 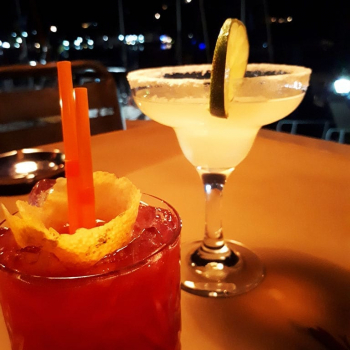 Ultimate Guide To A Greek Islands Yacht Charter With Skipper

Have you ever been sailing in the Ionian? Let us know your tips and comments below.

Kate Ioannidou
Kate is the Senior Charter Consultant at SailChecker's Greek Office. She specializes in the Mediterranean Charters, but with a great knowledge of the Caribbean Market as well. She has a degree in Philology with a specialization in Greek and Latin literature. Kate speaks three languages, loves traveling and photography and is a new enthusiastic sailor.
Recommended Posts

5 Things to Consider Before you Borrow a BoatSailing Tips