Top 5 Croatia Beaches You Should Sail to This Season

Top 5 Croatia Beaches You Should Sail To This Season

Croatia is one of the best places to sail in the world with its steady winds and line of sight sailing. On a Croatia yacht charter, in addition to great sailing conditions, Croatia beaches are some of the best in the world. With white sandy beaches, turquoise waters and beautiful secluded islands, waiting to be discovered on a yacht charter.

Croatia can be reached from anywhere in the world. There are a number of main coastal airports in Split, Zadar, and Dubrovnik, which connect the country to many European countries, from there you can connect to the rest of the world.

Croatia has hundreds of islands, from small uninhabited islands to beaches with a thriving nightlife. On a Croatia sailing holiday, you can visit ancient towns and natural beaches.

Croatia beaches offer a relaxing anchor point, overnight anchorage, or lunchtime spot waiting to explore. Many of the beaches can only be accessed by boat and unlike the beaches on the mainland or with easy transport access, many of these Croatia beaches maybe less crowded.

Medieval Atmosphere. Both the name of the island and town, Korčula is a small old town, which is often referred to as the ‘mini Dubrovnik’ with its narrow streets, high walls, outside restaurants and nightlife venues.

Lumbarda. The best beach on the island and one of the best Croatia beaches are Lumbarda. Located south of Korčula Lumbarda is surrounded by vineyards, is a beautiful crescent-shaped beach, with shallow waters for paddling and exploring.

Marinas. Lumbarda has a marina which has 115 berths, suitable for boats up to 25 metres and a depth of 8 metres. The marina can be reached via VHF Channel 17, or by phone number +385 20 12 489. The marina has an office, showers, toilets, a cafe, bar and a small supermarket.

Mljet Island. A third of the island is considered a national park, with luscious greenery, miles of cycling routes and hiking trails. The island only has one major road, that runs from north to south, of the island. The island is filled with thick forests of pines, oak trees and macchia. The island is one of the best locations in the list of Croatia beaches for scuba divers.

Saplunara. The Croatia beaches of Saplunara, are white sand beaches, backed in a pine-rimmed cove, which remains isolated and predominantly untouched bearing its original soul and characteristics. Saplunara is made up of two sandy beaches a larger one and one smaller one both located within a one-kilometre cove.

Hidden Jewel In Adriatic. The only way to reach Saplunara is by either ferry or boat, and the island has been inhabited since 61AD. There are no resorts or hotels on the island it is considered a “protected area”. This is one of the great Croatia beaches suitable for anchoring overnight.

Best Beach On Hvar. Located around 30 minutes from Hvar Town, Malo Zarace is often referred to as a little slice of heaven. Which can often be found empty and reached from Malo Zarace, following the east coast along the shoreline of the island.

Malo Zarace Beach. The colour of the water and the surrounding landscapes make the whole beach a dream. The pebbled beach is backed by rocks and cliffs, the beach also has two deep caves perfect for underwater adventures, and a great place to drop anchor for the evening. The village has a small number of traditional restaurants to stop at for the evening.

Other Hvar Beaches. Hvar is well-known for being a party island with a thriving nightlife scene and lively bars. Other beaches beautiful Croatia beaches to visit in Hvar are Jelsa, Stari Grad, Sucuraj, Jagodna, Ivan Dolac, and Gdinj.

Lopud Island. The small island of Lopud is a hidden paradise, both quiet and peaceful as well as having amazing scenery, transparent waters, fine white sand all backed by green hills and luscious vegetation. Inhabited since the 7th century, the island has evolved over time, with forts and ancient buildings which have stood the test of time.

Sunj Beach. Sunj is one of the best beaches on the island, which is often empty in the off-season, with boats and tours heading in and out of the area, during the season. The beach provides shallow waters which reach up to 100 meters off the shoreline in some areas, which provides a great area to go ashore with children and water sports.

Anchorages. Both Sunj beach and Lopud, on the northwest and southeast of the island.

Sulic Beach. A Game Of Thrones season two filming location, for the Battle of the Blackwater in episode 19, Sulic Beach is one of the closest beaches to Dubrovnik and its old town. This one of Croatia beaches is small and filled with pebbles, with ladders to the sea, protected by a cove and high cliffs. Away from the wind and waves of the seas, there is one large beach bar, perfect for afternoon refreshments, the beach is often quiet even in the high season.

Got a Burning Question? 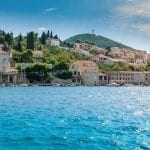 5 Benefits Of Sailing In Croatia In May or June [UPDATED]Croatia, Monthly Sailing 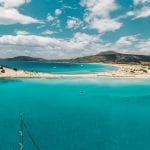 5 Best Beaches in Greece you Should Sail to this SeasonBest Yacht Charter Blogs, Greece