1
Yacht Racing for Dummies – What Happened Next – Part 2

Again, let me start by saying how much I love this image. For me it signifies the drama and passion of yachting and yacht racing.  There is a possibility that this images has been photoshopped – I forgive! Because all seasoned racers know this is a common and scary; more of that fear, emotion and the shear power of natural forces on display.

So, as this is for “dummies” who would like to know what is going on and why?

To start with, the are both heading ‘up-wind’.  Modern sail design allows life with sails operating like aircraft wings to create ‘lift’ and make this possible. But it’s not that simple!  To get ‘lift’, you need an ‘angle of attack’ of around 45 degrees. What does that mean! Well unless the wind hit the sail at on offset angle, diminishing amounts of lift will be created. Around 45 degrees is the optimum compromise as these yachts want to go where the wind is coming form.

This is both the act of changing the side the side hits the boat AND the name for the repeated zig-zaging that in necessary to get up-wind. You lose time on every occasion, but if you only do one big ‘zag’, and the wind changes, you could find yourself starting almost again! 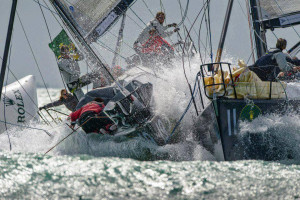 So, the point being, as yachts zig-zag up wind, they will cross.  And an I explained in my last post that discussed Windward & Leeward fight out as they ’round the mark’ there are rules that govern this.  This rule is rule number 1 (well 10 actually, but the first one in the section “When Boats Meet – Racing Rules”  It states:

“When boats are on opposite tacks, a port-tack boat shall keep clear of a starboard-tack boat.”

So what is Port & Startboard who, in our main image is on which.  Well the “tack’ you are on, is defined by the side of the yacht the wind is hitting (roughly speaking) and Port is the left-hand-side when facing the bow (front).  So in our image, the yacht in the foreground is on Startboard.

Therefore the yacht nearest us has Right of Way (ROW).  And it’s going to be a close run thing!  At this point the Port Yacht thinks she can pass ahead safely and keep the lead.  But she would have needed nerves of steel.  Judging the speed and distance is a very skilled job and often goes wrong.

Starboard can’t just crash into her!  The rules also say you have to avoid collision   But if she needed to change course to avoid port, she can protest and Port would be forces to take penalty turns!  More about that in a future blog.

If your Port tack yacht, you have to keep out of everyone’s way.  If you think your ahead, then “go for it”, you can’t wind races without being brave.  But I did say brave… not stupid!

In the image of the crashing yachts, according to rule 10, who is in the wrong?  Let us know it the Facebook Link below!  And if you dream of attending a Caribbean Yacht Charter or even race, www.SailChecker.com promise to research anything you are looking for!

Christopher Lait
Chris founded Drake Academy, a sailing company that provides leadership training to businesses. Now the CEO of SailChecker.com you will find him handling many of your enquiries as he attempts to drive SailChecker.com forward as the company of choice for yacht charter and sailing by focusing on quality advice and great customer service.
Recommended Posts 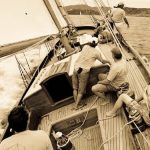 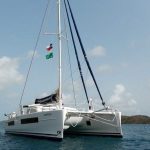